The soil and under-soil types :

The estate is located to the south of Vias, between the Canal du Midi, built by Paul Riquet in the 17th century, and the Mediterranean sea with its long sandy beaches. The earth is made up of sandy soils, sandy clay and limestone clay, with good drainage created by roubines. The land is flat and surrounded by Libron to the west, channels to the right and bordered by Grau d’Agde and the Tamirissière which are themselves divided by the Herault river.

The fauna and flora are typical of wet lands close to the sea and include seagulls, cormorants, ducks, herons, water hens, egrets, reeds, canotes, tamarins and blanquettes. People have also planted poplars, blackberry bushes, olive trees and palm trees. Rice is grown is this area as well as the vines.

The under soil below the arable layer, is made up of sand and water with the ground water meeting at 1m60 and then several impermeable layers of clay holding slightly salty water. Finally, about 90m down and well isolated is a layer of drinking water.

The estate is also watered with soft water from the Canal du Midi close by, fed by a network of roubines which allows the vines to be watered in summer and the salt water to be diluted.

The plots of land surround the estate buildings. Another piece of land is located to the north of the village, recently acquired to compensate for the reduction in land caused by the increased urbanisation of the resort. The plots of land measure from 1 to 6 hectares giving a total of about 30 hectares.

The Mediterranean climate is very varied and quite often extreme. Mild in winter, hot and dry in summer with spring often very changeable and autumn either very wet or very dry. It is, however, the amount of sunshine that makes this climate so suited to wine growing. 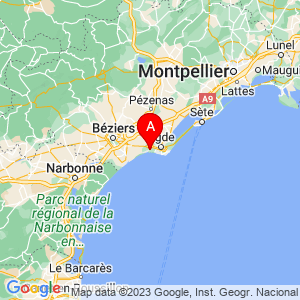